People born under the Leo Fire Dragon sign are generous. They are not hesitant to give more than others. LFDs have a strong sense of loyalty so don’t worry about them stabbing you in the back, in fact, they will probably save you from it. People born in this sign are dynamic meaning they are prone to growth and progression. LFDs usually don’t have a problem when it comes to dealing with difficult situations or moving up in their careers. They also bring warmth to people around them making it hard for people to move away from them. Leo Fire Dragons are one of the most ambitious signs, they will do whatever it takes to achieve their goals. They are also one of the most energetic signs which makes them fun to have around.

On the other hand, the Leo Fire Dragon sign has a tendency to dominate people. They may ignore other people’s feelings and force their way through to obtain what they desire. Their arrogance will make them think highly of themselves which can sometimes hurt others around them. The LFD is can an aggressive character. They will push people aside to obtain what they want. If they feel that their precious time is being wasted, they will become impatient and will take things into their own hands without caring about other people’s opinions. The Leo Fire Dragons are demanding of others, making it very difficult for people to get along with them. At times, the dragon can become eccentric when they become irregular and go against conventions. 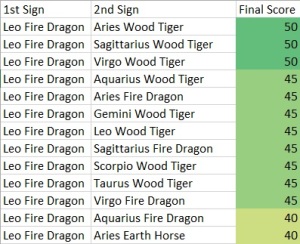